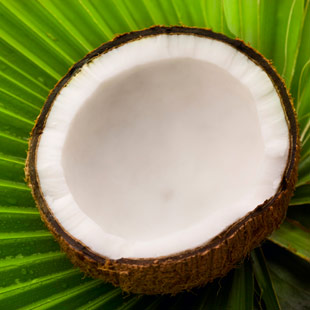 All things coconut seem to be über popular these days. To that end, more and more I’m hearing about replacing butter with coconut oil—because it’s (allegedly) healthier. The skeptical dietitian in me balked at the notion, but then I thought I ought to investigate. Here’s what I found.

What about the buzz that the type of saturated fat in coconut oil is healthier?
Emerging research suggests that some saturated fatty acids may not be harmful. (What we call saturated fat is actually a mosaic of building blocks called saturated fatty acids, such as lauric, myristic, stearic and palmitic acids.) The main fatty acid in butter is palmitic acid. And palmitic acid appears more likely than others to cause the buildup of fatty plaque in arteries. Lauric acid is the main fatty acid in coconut oil—and research suggests it boosts beneficial HDL cholesterol, but it also raises unhealthful LDL. Excessive LDL is damaging to the heart and arteries because it accumulates in artery walls and can trigger inflammation, eventually leading to a heart attack or stroke. “Coconut oil is slightly less evil than other saturated-fat-rich foods like palm oil and shortening because of its impact on HDL,” says Penny Kris-Etherton, Ph.D., R.D., F.A.H.A., a distinguished professor of nutrition at Pennsylvania State University. “But it still isn’t good for you.”

Copied with permission from: http://mobile.eatingwell.com/blogs/health_blog/is_coconut_oil_healthier_than_butter